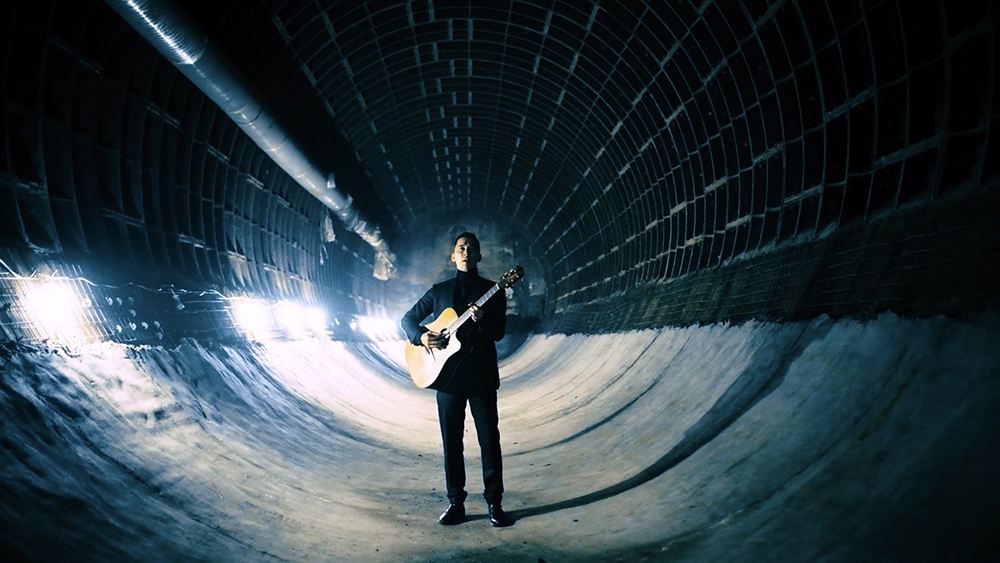 As one of over a million people in Hawaii who were told on January 13, 2018 that they were about to be hit by a nuclear missile, renowned Hawai’i artist Makana said,

“Waking to an alert of a nuclear attack in Hawai’i got me thinking.  Why is this even a possibility?”

When Makana found out that the US and Russia possess over 90% of the world’s nuclear weapons, he was inspired to travel to Russia:

“I wanted to experience this other country, people and land first hand. This journey led to the creation of relationships and then art to share with the public on both sides of the ocean. My intention is to inspire and remind us all to humanize one another, to dignify and be curious about each other. The conversations that do get broadcast are political conversations, of threat, of geopolitics.  But those conversations have virtually nothing to do with the daily lives of hundreds of millions of people in our two nations.  We need to create direct relationships.  It’s the only way that we – nationally and individually – will ever achieve security and peace.”

Makana performed benefit concerts for audiences in Moscow and St. Petersburg organized by Bruce Allyn and Cynthia Lazaroff, who, after also experiencing the gut-punch of the Hawaii Missile Scare, founded NuclearWakeUpCall.Earth to awaken people to today’s unprecedented nuclear danger.

In the words of former U.S. Secretary of Defense William J. Perry, “Today, the danger of some sort of nuclear catastrophe is greater than it was during the Cold War and most people are blissfully unaware of this danger… we are allowing ourselves to sleepwalk into a nuclear catastrophe. We must wake up.”

We are today in an unchecked new arms race, with decades-old arms treaties collapsing and unimaginably deadly new sci-fi weapons systems being developed.  The U.S. and Russia have stopped cooperating in critical areas of nuclear risk-reduction.

Russian friends told tour organizers about Bunker 703, a recently declassified, once top-secret and now deserted nuclear bomb shelter deep underground in Moscow, formerly a repository for the Soviet Foreign Ministry’s archives, disguised as a chocolate factory during the Cold War.

Led by a Russian soldier, Makana was the first American ever to descend into Bunker 703.  Makana was inspired to improvise a song on the spot.  What we witness in the video is the process of lyrics and music being created and sung for the very first time.

“Standing in the tomb-like space, my soul began to cry in the form of song,” says Makana.

The moment was captured on film with a hand-held camera and microphone.

In one take, Makana created the haunting ballad, Mourning Armageddon, both a song of mourning and a call to action.

Mourning Armageddon was all shot on location in Moscow and St. Petersburg. Images inside the bunker are otherworldly, indelible. The surreal acoustics reverberate inside a chamber, hermetically sealed and deep enough to withstand a nuclear blast–evoking the sound of a kind of nuclear chamber music, a post-apocalyptic “wake for the world.”

Musician Tom Dawson, 35, was living in Hawaii during the missile scare. Previewing the video, he said:

“Listening to Makana in the bunker is like opening a time capsule buried deep.  He is channeling all this emotion from the madness that happened in the past that is still with us in a dormant mode.  My generation never lived through any of the fear of the Cold War, the nuclear drills, the duck and cover.  We don’t know it because we did not live through it. We never had an emotional connection to this.  So we need artists and people to connect us with it, so we can understand the gravity of it.  It is painful. He is grieving. He is mourning. It makes you angry and sad and heartbroken all at the same time.  And hopefully it will go out into the world and make people want to do something about it.”

”We’re in bed with annihilation,” Makana says, “There is a phrase in Hawaiian, “Kū’ē i ka papau make” (Resist annihilation).  “It’s time for people everywhere to do that.”

The video has cutaways to Makana’s trip through Moscow & St Petersburg, including his visit to Piskarovskoye Memorial Cemetary in St. Petersburg, the site of mass graves of 500,000 people who perished during Hitler’s Siege of Leningrad during World War II.”

NuclearWakeUpCall.Earth was founded as a nonprofit, nonpartisan initiative to catalyze efforts in US-Russian relations to reduce the escalating nuclear danger and move towards a world without nuclear weapons.

Read Cynthia’s gripping account of her family’s experience during the Hawaii missile scare in the Bulletin of the Atomic Scientists: https://thebulletin.org/2018/08/dawn-of-a-new-armageddon

Rep. Adam Smith, Chair, House Armed Services Committee: “At the end of the day, the reason we have as many weapons as we have is based on plans that were contemplating how to win a nuclear war – but you can’t win a nuclear war – a lesson we certainly should have learned a long time ago. So, basing our strategy on that premise is wrong.

Rep. Tulsi Gabbard: “The threat of nuclear war, of nuclear attack, is not a game.  This is real… Lives are at stake.

Rep. Ted Lieu: “…funding the development of low-yield nuclear weapons with no established need or strategy puts us at greater risk for catastrophe.”

Daniel Ellsberg, Winner of 2018 Olaf Palme Prize, former nuclear war planner turned activist, says, “If we don’t get rid of the US-Russia Doomsday Machine, the chance of getting through another century is small.  We are living on borrowed time.”

Beatrice Fihn, Executive Director of the International Campaign to Abolish Nuclear Weapons, which won the Nobel Peace Prize in 2017, warns that nuclear catastrophe today “is only one impulsive tantrum away…. We have avoided nuclear war not through prudent leadership but good fortune. Sooner or later, if we fail to act, our luck will run out.”

Rep: Barbara Lee: “Now, it’s up to Congress to protect the global progress towards disarmament before it’s too late. American families shouldn’t have to live under the threat of nuclear war.”