“I come from a family of inventors,” says composer/guitarist/educator Todd Ferris Mosby. “It ties into the whole Daniel Boone ideal of forging ahead, march to your own drum, having no preconceived ideas.”

The Daniel Boone reference above may give some insight into the guitarist’s early predilection for the bluegrass revival movement of the ’70s where he fell in love with music from Doc Watson, Vasser Clemens, Bill Monroe, The Flying Burrito Bros, and Earl Scruggs. He also developed a taste for leading folk artists, such as James Taylor and Joni Mitchell. With that as a springboard, he eventually expanded his palette to fusion, jazz and sophisticated pop music.

While in college, a chance opportunity to catch an Indian music concert and workshop opened up Mosby up to the winding microtonal capabilities possible in non-Western music and he pursued these new paths with steely conviction. “The music was so difficult, but I was so passionate about it. I used to get headaches and pass out trying to learning it.” Parallel to this, he became more spiritually centered through yoga and meditation and his rigorous music practice routine slowly blossomed into a kind of prayer. These awakenings and introspection also led him to numerous charitable pursuits. Much later on, Mosby made history as being the only guitarist to become a member of the famed Imdad Khani Gharana, India’s royal family of sitar ustadt musicians with an unbroken chain dating back 500 years.

Todd Mosby is a seeker and learner who believes in the transformative power of music. He explores a life of creative purposefulness, sharing his knowledge and innovations along the way—in all his pursuits, that’s his missive. Mosby’s vibrant creativity has led to numerous innovations in music spanning inventive compositions, imaginative technical books for guitar, co-creating a new instrument (the Imrat guitar), to an assortment of products which enrich and enhance artistic expression. “In my household growing up, there was always this freedom to go your own way. It was ‘Yeah, you can do it! You can do whatever you put your mind to!'” the St. Louis, Missouri based artist says. ‘Why not build an instrument? Why not be a guitar player but play Indian music?’ It wasn’t rebelliousness, it was curiosity and passion.”

At present, Mosby is considered one of the finest jazz guitarists in St. Louis and has been voted one of the top guitarists by the STL River Front Times readers’ poll. He has played symphony halls, headlined area Jazz festivals, performed in concert venues, clubs, charity events, accompanied major dance companies, and was one of the first artists from St. Louis to enter Russia on a 3-city tour after Perestroika in 1994. Mosby has shared the stage with Michael Manring, Imrat Khan, Shafaat Khan, Jeff Haynes, and Milton Hinton, among others. He has opened for The Rippingtons, Michael Franks, Spyro Gyra, and Chris Bonti. In addition, Todd’s music has been featured in films, television, shows, and advertisements. “My goal as an artist is to introduce audiences to new forms of contemporary music based in tradition with attention to the highest standards of musical excellence. My mission as an artist is to connect with audiences at the spiritual, emotional and physical levels and as such, change lives.”

Mosby purposefully fuses various musical idioms within his New Horizons Ensemble and live concerts. He released an astounding CD package, Eagle Mountain, with Will Ackerman, Grammy artist/producer, founder Windham Hill Records with two more on the way. His thorough immersion into Indian music has helped him co-conceive a new instrument, the Imrat guitar, so that he could access the sensual melodies of Indian music with the choral possibilities found in Western music on the standard 6-string guitar.

Mosby, a visionary who considers every facet of creativity, has developed a finger oil to ease fret hand friction and a revelatory line of instructional books that tidies up Western music theory abstractions as related to guitar, putting them into useful groupings to jump-start actual music playing. He’s also written a landmark book that appropriates the highly developed picking chops of Indian musicians and applies it to Western musical melodic exercises. “That’s the sound I’m devoted to putting out there, I have a strong need to service humanity thru music. I compose music to share with others, musicians and audiences alike, so they might in turn express an emotional, heartfelt connection to environment, personal well being and others.” 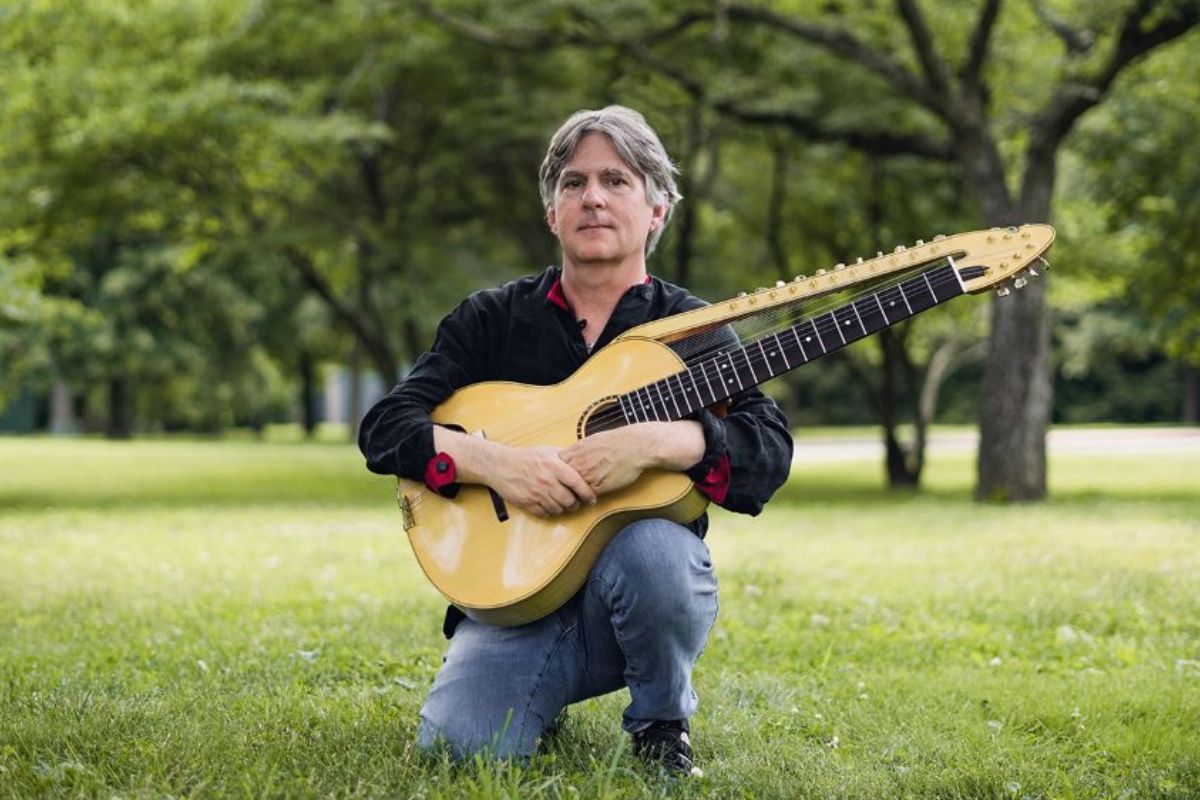 The Imrat guitar is an 18 stringed hybrid sitar guitar designed by sitar maestro Imrat Khan, guitarist Todd Mosby and luthier Kim Schwartz. The instrument is the first of its kind bridging the cultures of eastern and western music. The use of 11 sympathetic strings, 3 chikara strings, 4 playing strings and javari allow subtle and melodic phrasing characteristic of sitar and modal chord harmonies found in jazz. The Imrat guitar combines the finest aspects of sitar and guitar. According to sitar innovator, Ustad Imrat Kahn,” It sounds better than a sitar and better than a guitar.”

The scalloped finger board offers maximum control of a pull and micro tonalities without digging fingernails into the fingerboard.

The sympathetics allow for maximum tonal resonance of the note being played thereby extending the decay length of the pitch. Having 12 sympathetic strings allows the ability to tune them to the scale/rag which is being played. This intern quadruples the natural tonal resonate of the guitar and at the same time allows a natural tonal harmony to blossom forth from the series of notes being played. An ethereal kind of harmony is created which is unique to this instrument.